November SkepTalk: Climate Change from the Biotic to the Exotic – Minda Berbeco, PhD 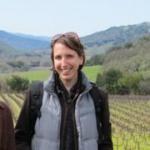 As their new Programs and Policy Director, Dr. Berbeco works to defend science education in the United States using experience she has culled from a career investigating the effects of climate change on terrestrial systems. Her investigation of the unexpected and unusual effects of climate change on biological organisms was the focus of her talk this month for the BAS.

Dr. Berbeco began her presentation by surveying the audience about their knowledge of the effects of global climate change. Answers included such things as extreme weather, the endangerment of wildlife, a rise in global sea levels, etc. After pointing out how the audience’s feedback suggested a good working knowledge of the effects of global warming, as well as the disparate areas of concern, Dr. Berbeco announced that she would concentrate her talk on a few specific examples through which she hoped to reveal some of the key concerns scientists are attempting to investigate.

One of the most impressive aspects of Dr. Berbeco’s talk was her ability to tie difficult scientific ideas to everyday issues that people might be better able to relate to than mathematical formulas or large charts with temperature readings. Chief among these was her discussion of the effects of global climate change on wine. She began by asking for a volunteer from the audience to taste a glass of red wine and report the flavors she or he experienced. Never one to pass up a free glass of vino, our own David Almandsmith jumped into action. After taking a generous sip, David described the wine in impressively specific ways, including “tartness of persimmons, cinnamon,” and “relatively dry.”

Dr. Berbeco used David’s description to illustrate that many of the aspects of our food that we enjoy the most, wine included, is the result of the climates in which they are grown. Even slight alterations in weather can change these climates in ways that dramatically affect our food’s taste, smell, appearance, and even nutritional value. For vineyard owners, this part of the “terroir” (aspects of where the grapes are grown, such as geology, geography, and climate) can mean the difference between an award-winning crop, and bankruptcy.

As an example, Dr. Berbeco discussed tannins, a diverse group of chemical compounds in wine that can affect color, aging ability, and texture. They cannot be tasted or smelled, but can be “felt” as the tactile experience wine connoisseurs refer to as “dryness.” These decrease significantly in hotter temperatures, and can dramatically affect the consumers’ experience of many wine varieties. Also of concern is the fact that sugars increase as temperatures rise, making formerly mild wines taste sweeter. Perhaps even more alarmingly, some climate changes negate plants’ natural ability to ward off insets, putting entire crops at risk, and increasing the need for chemical pesticides.

Dr. Berbeco went on to explain that the impact of global climate change isn’t limited to flora. Animals are also affected in some pretty dramatic ways, particularly those who live in the ocean. In a short video, she explained that over 30% of the carbon pumped into the atmosphere is absorbed by our oceans, creating a cascade effect that leads to an increase in ocean acidification. Even slight changes in Ph balance can lead to some pretty nasty disadvantages. Sea snails, for instance, use their sense of smell to tell them when predators are in the area, at which point they harden their shells in defense. In a more acidic environment, they can lose this ability, leading to a very happy population of crabs, but a severe increase in the things that sea snails normally eat, including algae, dead fish, etc.

Another example Dr. Berbeco provided was clownfish (yes, the Nemo variety). Scientists have found that they are particularly sensitive to elevated levels of carbon dioxide while in the “settlement-stage larvae” phase of their development . As they float around, deciding on which sea anemone to inhabit, they use odors in the water to decide which real estate to claim. These odors do two things for them. First, it helps them choose an area with fewer predators. And perhaps equally important, it assists them in avoiding any area that is near their parents, thus decreasing the likelihood of incest. In a higher CO2 environment, they lose this ability and actually become attracted to their parents’ scent instead. Aside from the emotional reaction most people have to that little factoid, anyone with a high school level understanding of biology knows what sort of havoc such a change would wreak upon the clownfish gene pool.

In the end, those of us who do our part to increase awareness of global climate change, and who try our best to cut back on activities that contribute to polluting the environment, can also proudly boast that we are helping to secure a future full of good wine, well protected sea snails, and incest-free clownfish. I’ll leave it to the rest of you to dream up the bumper sticker for that one.

Skeptics in the Pub – Online

WHAT:  Skeptics in the Pub
With Omicron raging but a great experience at SkeptiCal a few months ago, we’ve decided to take Skeptics in the Pub virtual. We’ll be using Zoom, which worked very well for SkeptiCal 2021.
This is a casual night of socializing with fellow skeptics. We’ll have a number of breakout rooms for quieter conversations.
Please join us! This is a free event brought to you by Bay Area Skeptics. All are welcome, but please be respectful of others.

WHAT:  The Confidence Men: How Two Prisoners of War Engineered the Most Remarkable Escape in History
Imprisoned in a remote Turkish POW camp during World War I, having survived a two-month forced march and a terrifying shootout in the desert, two British officers, Harry Jones and Cedric Hill, join forces to bamboozle their iron-fisted captors. To stave off despair and boredom, Jones takes a handmade Ouija board and fakes elaborate séances for his fellow prisoners. Word gets around, and one day an Ottoman official approaches Jones with a query: Could Jones contact the spirit world to find a vast treasure rumored to be buried nearby? Jones, a trained lawyer, and Hill, a brilliant magician, use the Ouija board—and their keen understanding of the psychology of deception—to build a trap for their captors that will ultimately lead them to freedom. A con game played for a good cause, the incident provides Fox an opportunity for reflections on the psychology of deception and how in the beginning of the 20th century, speaking to dead spirits seemed less implausible: the world was full of almost unbelievable miracles of magnetism, electricity, radio, and other wonders.

WHO:  Margalit Fox originally trained as a cellist and a linguist before pursuing journalism. As a senior writer in The New York Times’s celebrated Obituary News Department, she wrote the front-page public sendoffs of some of the leading cultural figures of our age – including The Amazing Randi. Winner of the William Saroyan Prize for Literature and author of The Confidence Men and three previous books, Conan Doyle for the Defense, The Riddle of the Labyrinth, and Talking Hands, Fox lives in Manhattan with her husband, the writer and critic George Robinson.