Science: Real and Imagined with the SciSchmooze

I have to say that these truly are amazing times.  The denial of science and reason is truly astounding.  We have made so many amazing discoveries and transformed them in to amazing technologies and raw understanding of what is reasonably possible I am awed every time I open a new email from one of the many email lists and blogs that I get.  Sometimes I wonder if there are limits!  I can’t really go through all of them.  I’m sure that you get more than you can read as well.  There is more out there that some people are trying to get us access to as well.  The war to free science

I know that most schools will be back in session by the middle of September.  Hopefully people won’t be taking them out of school to go to a little town called Rachel (pop. 54) in Nevada.  A couple of years ago there was a panic across the nation.  There was concern that millions of people were going to converge on a strip of land that went from the Pacific to the Atlantic Oceans.  Oregon for example prepared for it as if there was going to be a major disaster on the scale of the Cascadia Earthquake.  For them and many others across the country it was a chance to practice for big problems that often have no warning.  A major difference from what is happening in Rachel is that everyone knew, thanks to science, that the sun was going to disappear for a couple of minutes.  Rachel has a different problem.  Even the Creator Of ‘Storm Area 51’ Page Says Don’t Actually Do It and Belize is offering free trips to residents of Rachel who want to escape ‘Storm Area 51’  If you do go, good luck and drop us a note to let us know how it’s going.  Don’t bring the kids!  Get ready for April 8, 2024, where will you be?

There seems to be a surge in public presentations this week.  I’m having trouble only choosing three!  I do think these are some special opportunities.  Consider these…

Bonus event…  The Archaeology of Beer also on Thu @ 6:00 in Berkeley
Also, be sure to check the calendar for updates.

The annual Perseid meteor shower (arguably the best meteor shower of the year) will peak on the nights of August 11/12 (Sunday/Monday) and (slightly more) 12/13 (Monday/Tuesday), but the nights of August 9/10 (Friday/Saturday), 10/11 (Saturday/Sunday), and 13/14
(Tuesday/Wednesday — but essentially full moon) should be pretty good as well. View them after 11 pm local time — or better, after 1-2 am; the dark predawn hours should actually yield the largest hourly rate. [Before about 11 pm, few Perseids are visible (though they should be longer streaks than average, skimming through Earth’s atmosphere because the “radiant” from which they appear to come will be closer to the horizon).] Also, you don’t have to account for your specific *time zone* — the times I list above are fine *regardless* of where you are (though the northern hemisphere is much more favorable than the southern hemisphere, for this shower).

Unfortunately, moonlight will be a big problem this year: full moon will be on Wednesday night, August 14/15, so we’ll have a bright waxing gibbous moon during the weekend. If you can be up in the dark pre-dawn hours after moonset, you best bets are the mornings of Sunday (August 11) and Monday (August 12) instead of Tuesday, August 13 — there will be more dark time before dawn. However, if you *don’t* want to wake up so early (or stay up so late!), I suggest you watch after 11 pm or midnight on any of the nights mentioned above. Some meteors will even be visible this entire week (i.e., starting tonight), and the Moon won’t be as much of a problem (indeed, it will set around midnight tonight, August 7; it will set later after August 7).

The meteor shower occurs because Earth flies through debris from Comet Swift-Tuttle, and the little bits of rock and ice will burn up as they zip through Earth’s upper atmosphere (altitude about 60 miles) at roughly 130,000 miles/hour.  (“Shooting stars” or “falling stars” are not stars at all, of course!)

I encourage you to view the meteor shower, for at least half an hour (but an hour or longer is better). Try to get as far away from city lights as possible. The Perseids are known for having many bright and fast meteors that should be visible even in a somewhat light-polluted sky (as will be the case because of the gibbous moon this weekend), though you’ll see many more from a darker location and after the Moon has set. *NO* binoculars or telescopes are needed; just look at the sky with your unaided eyes after getting dark-adapted (this can take about 15 minutes). Choose a wide-open sky, without buildings or trees in the way. Dress warmly, and pack a hot beverage if you want to. Bug spray might be useful, too, depending on where you are. You should lie down on a mattress, sleeping bag, or reclining lawn chair for greater comfort, if you wish.

Looking anywhere in the sky is fine, but views to the northeast should provide the most meteors. If you have clear skies, you might see 1-2 dozen per hour. The meteor rate will be highest when viewed from the northern (not southern) hemisphere.

WHEN:  7PM Wednesday 26 February (4th Wednesday) (No gathering in December) 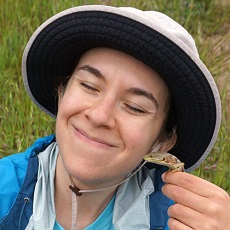 WHAT: Why storytelling is vital to science communication
Many think that storytelling is only for fiction and frivolity. But storytelling is essential to all forms of communication. This is especially true when communicating science. Storytelling primes the brain to absorb and recall information. Without the story, the science does not stick. In this talk, I will explore the why and the how of science storytelling based on my years of experience working between academia and arts industries. The lessons learned can be useful for anyone who wants their communications to be received and considered.WHO: Sara ElShafie
is a Doctoral Candidate in the Department of Integrative Biology at the University of California, Berkeley. Her research, based at the UC Museum of Paeontology, investigates climate change impacts on animal communities over time.

She also works at the intersection of science and entertainment to make science accessible and exciting for the masses. Sara created the “Science Through Story” workshop (https://www.sara-elshafie.com/workshopsx) and consults on science storytelling projects.