The demonstrators wore white t-shirts with ???1023 Homeopathy: There???s Nothing In It??? emblazoned in blue. One demonstrator, Athena, had blue hair to match. We assembled at the corner of Franklin & California Streets 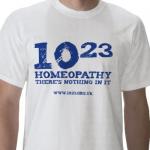 in San Francisco with a banner & leaflets to protest the marketing of homeopathic ???remedies??? by Whole Foods, CVS, Walgreens, and others. Similar and simultaneous demonstrations were taking place in 22 other cities on all seven continents around the planet.

We passed out the small information leaflets, took pictures of each other, and chatted in uncharacteristically warm weather. Among the demonstrators were folk from The Exploratorium, the California Academy of Science, Atheist Nexus, Reason 4 Reason, East Bay Skeptics Society, two board members from the Bay Area Skeptics, miscellaneous skeptics, scientists, programmers, and students.

At 10:23 AM, we all quaffed ???over-doses??? of homeopathic remedies ??? sort of. Since ???real??? homeopathic fake medicine costs ???real??? money and we don???t want to support that industry, only a few drank homeopathic concoctions ??? the rest of us drank the equivalent: distilled water.

* * *
In case you found it odd that distilled water is equivalent to homeopathic remedies, allow me to take you on a brief excursion back to high school chemistry and math. [SCREAM!!!] The ???molecular weight??? of a substance is the weight in grams of 6.022 x 1023 molecules of that substance, a.k.a. Avogadro???s number. For aspirin, that amounts to 180 grams, or about 6.3 ounces. To prepare a homeopathic ???remedy,??? a small quantity of the physiologically active substance is diluted again and again with 100 times as much distilled water. After the first dilution, the active substance is present in the solution at a concentration of about 10-2. After a total of 12 such dilutions, the concentration of the active ingredient is about 10-24, which means that there is less than a 50-50 chance that a single molecule of the substance is in 6 oz. of the solution. But homeopaths don???t stop there; they typically dilute the substance a total of 30 times achieving a concentration of about 10-60. That???s pretty dilute. You???d find one molecule of the active ingredient in a quantity of solution about the size of 30 billion planet Earths. Q.E.D., it???s equivalent to distilled water. Of course a homeopathic charlatan will tell you differently; that the process of succussion [hitting the container against a ???special??? striking object] causes the ???vital energy??? of the ingredient to persist irrespective of dilution. This silliness made sense to some folk in 1796 when the process was invented. [John Dalton???s atomic theory wasn???t published until 6 years later.]
* * *
After more photos, interviews for a media project, and getting to know each other, I headed back home promising to write letters to CVS, Walgreens, Food Mill, Whole Foods, and others who are profiting by this quackery.

Special thanks to Jay Diamond, Norman Clevenger, and others for organizing this protest in San Francisco.

WHAT: How to Effectively Push Back Against Misinformation
Are we living in a post-truth world where facts no longer matter? Scientific research into “debunking” misinformation shows that there is still a place for facts. But when facts are not enough, what can we do? This talk will address fears of the backfire effect, as well as provide evidence-based recommendations on how best to push back against misinformation, using examples drawn from the ivermectin saga, Havana syndrome, and multiple chemical sensitivity.

WHO: Jonathan Jarry is a science communicator with McGill University’s Office for Science and Society, dedicated to separating sense from nonsense on the scientific stage. He has a Master’s degree in molecular biology and he brings his experience in cancer research, human genetics, rehabilitation research, and forensic biology to the work he does for the public. With cardiologist Dr. Christopher Labos, he co-hosts the award-winning medical podcast The Body of Evidence. He talks about science every Friday on CTV Montreal News and is regularly interviewed in both English- and French-language media.

WHAT: Calling all skeptics, science enthusiasts, and critical thinkers. It’s time to gather with some of the brightest minds in science and reason as we fight back against the rising tide of misinformation, conspiracy theories, and pseudoscience.

Registration is now open for what just might be the biggest and best skeptics’ conference ever. CSICon 2022 will be your chance to hear from artists, intellectuals, scientists, and scholars committed to promoting science, reason, and humanist values.

Join us as we work to end the Misinformation Age—and have a great time doing it!